Planners claimed the A.R.T. project will be mostly paid for by the federal government. 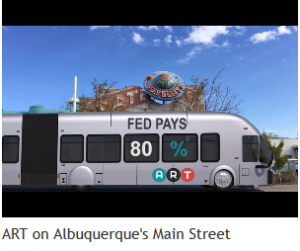 On March 21, 2016 ABQ City Council voted to accept federal money if it is offered. City officials promised the City Council they would get a letter of commitment from the FTA before beginning the A.R.T. project. Read more

The FTA has not yet given ABQ a commitment letter for A.R.T. funding. Mayor Berry claims being recommended in the budget "gives us a real level of certainty according to the experts". See more in the following June 01, 2016 interview.

Recently the FTA announced it is only recommending $50 Million for A.R.T. The city says not to worry -- they'll borrow the money. Watch June 28, 2016 Channel 13 story

The mayor claimed on July 1, 2016 that ABQ sill has a commitment from the federal government for $69 Million.

"When people get misleading and sometimes false information, they are understandably upset." - Mayor Berry